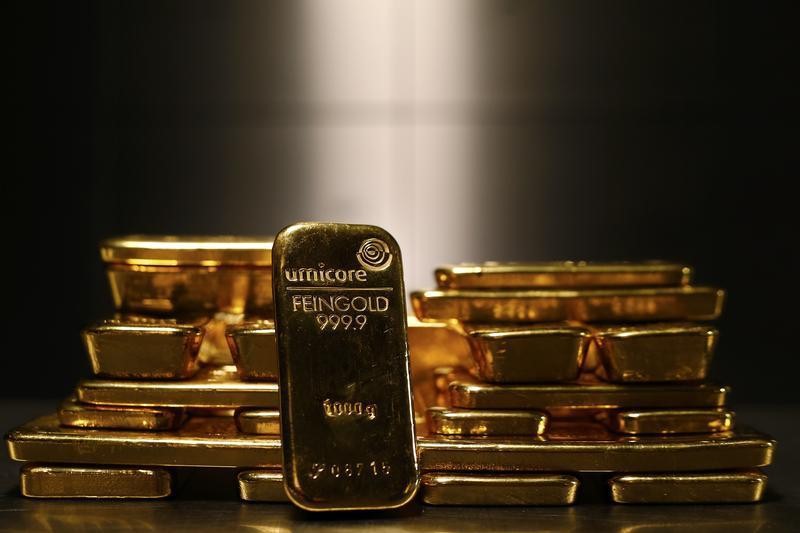 Investing.com– Gold prices hovered around six-month highs on Wednesday, cutting short a recent rally as traders bought back into the dollar in anticipation of more cues on monetary policy from the minutes of the Federal Reserve’s December meeting.

The yellow metal marked a strong start to the new year as concerns over a looming recession and a potential slowdown in U.S. interest rate hikes led to increased demand for safe havens apart from the dollar.

But the greenback recovered some lost ground on Wednesday, benefiting from uncertainty over the upcoming Fed minutes. Markets will be waiting to see if the members of the central bank supported a further easing in interest rate hikes during the December meeting, given that several inflation indicators showed that U.S. price pressures have likely peaked.

Markets are now pricing in an over 90% chance that the Fed will hike rates by an even smaller 25 basis points in February.

A warning on a potential recession in 2023 from the International Monetary Fund encouraged some buying into gold, given that the possibility of a U.S. recession dents the dollar’s appeal.

This warning, coupled with growing concerns over a delayed economic recovery in China, saw copper prices mark a weak start to the new year. Copper futures were flat around $3.7707 a pound on Wednesday, after plummeting nearly 2% in the prior session.

The red metal is sensitive to any changes in the economic outlook, given its heavy use in industrial applications. A manufacturing slowdown in China, due to COVID-related disruptions, saw copper prices sink nearly 12% in 2022.

While the country relaxed several anti-COVID measures in December, it is now facing an unprecedented spike in the spread of the virus, which analysts fear could delay a broader reopening.

Still, the prospect of slower interest rate hikes by the Federal Reserve is expected to benefit metal markets in the near-term, especially if the dollar loses further ground. The greenback retreated sharply in the fourth quarter of 2022, which saw metal markets regain some lost ground.