Senate panel to meet on Yellen nomination for Treasury on Friday 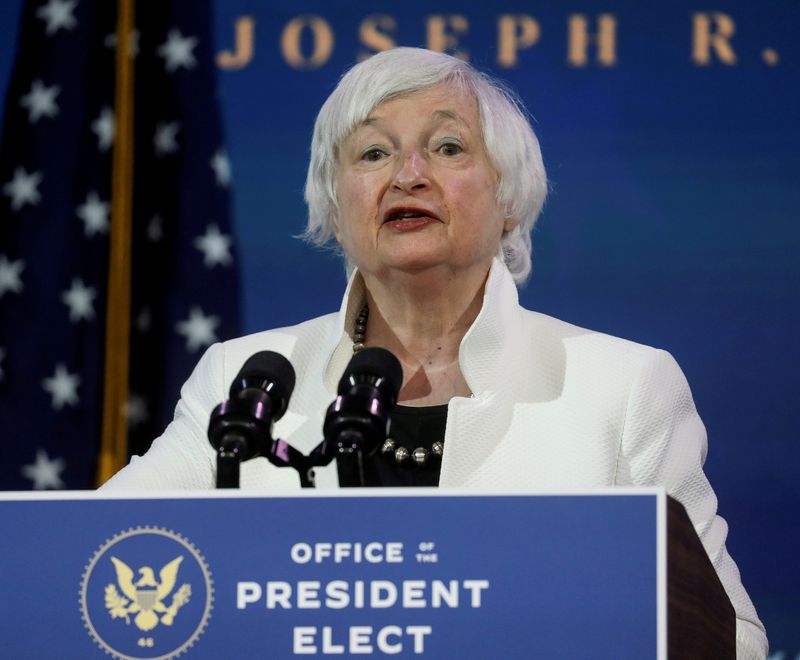 By Andrea Shalal and David Lawder

WASHINGTON (Reuters) – The U.S. Senate Finance Committee scheduled a meeting for Friday to consider the nomination of Janet Yellen for Treasury Secretary, raising the possibility that she could be confirmed by the full Senate later that day, congressional sources said.

The new administration of President Joe Biden is pushing for speedy confirmation of key cabinet members to accelerate efforts to fight the COVID-19 pandemic and move forward with economic relief measures.

As the Senate continues to consider Yellen’s nomination, the Treasury Department on Wednesday named several people to senior Treasury posts that do not require Senate confirmation.

Yellen urged lawmakers on Tuesday to “act big” on coronavirus relief spending, arguing that the economic benefits far outweigh the risks of a higher debt burden.

Committee members had until Wednesday evening to submit additional questions related to Yellen’s confirmation hearing, putting pressure on Yellen to respond and on the Senate to act before lawmakers head home for the weekend.

One source familiar with the congressional process said a second hearing was unlikely, although Yellen’s predecessor Steven Mnuchin had to sit through a second round of questioning when he was confirmed in 2017.

Democrats took control of the U.S. Senate on Wednesday when Vice President Kamala Harris swore in three members, giving the party a narrow grip on both houses of Congress.

Senate Finance Committee members could vote to approve Yellen’s nomination at Friday’s meeting, which was added to the calendar late on Wednesday, giving leeway for the full Senate to vote on it before the end of the week, or early next.

Yellen, who served as head of the U.S. Federal Reserve from 2014-2018, had won strong support from Democrats, former Treasury secretaries and many economists.

The Treasury named Didem Nisanci as chief of staff and Calvin Mitchell as assistant secretary for public affairs and Jacob Leibenluft as counselor to the Treasury secretary.

Nisanci, previously Bloomberg LP’s global head of public policy, had served as chief of staff at the Securities and Exchange Commission during the Obama administration. Mitchell, who held several communications roles in the Clinton administration, had later served as executive vice president of communications at the Federal Reserve Bank of New York and head of corporate affairs at Thomson Reuters (NYSE:TRI).

Leibenluft, a senior fellow at the Center for American Progress, had been deputy director of the National Economic Council during the Obama administration.

For multimedia coverage please open https://www.reuters.com/world/us in a separate browser